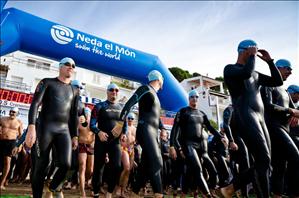 Neda World continues promoting its charitable side, keeping its position in 2013 as the open water swims organization which contributed more money to charitable causes. And this was thanks especially to our flagship event, the L'Estartit - Medes Islands crossing which will allocate 100% of its profits to the TV3 Marathon and more specifically to the study and research of neurodegenerative diseases.

Sunday, during the TV3 Marathon show, we will deposit € 3428 thanks mainly to the involvement of hundreds of swim addicts who came to the 4th edition of the crossing, and thanks also to the four entities from L'Estartit that are involved: City of Torroella Montgri, Estartit Yacht Club, the Natural Park of L'Estartit and Medes and the Nautical Estartit Medes.

Many thanks to you all! We are very proud to contribute our little grain of sand in the investigation of neurodegenerative diseases!